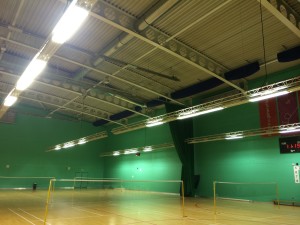 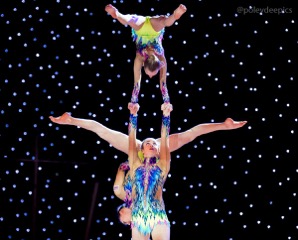 London Gymnastics “A Night Of Stars” Event From Conception to reality!

On the 27th of November 2015. MAC Productions Ltd supplied all the equipment, and provided full technical support for a ‘brand new’ event by London Gymnastics, part of the UK National Governing Body for the sport of Gymnastics.

It was called “A Night Of Stars” and was held at Redbridge Sports Centre in Ilford, Essex.

The brief MAC Productions were given was to create the atmosphere of a Gala Awards Presentation Event. Whilst still providing lighting and sound coverage for an area large enough to demonstrate group performances on both floor and apparatus safely.

In other words, take a Sports Hall and turn it into an Awards show that can still function as a Sports Hall, without looking like one!!

Never ones to pass up a challenge we attended a site visit and took it from there.

The venue had never before been used for an event of this type, size, style, or complexity. So special care and attention had to be paid to obtaining load bearing specifications of support beams, etc.

Given the Very different requirements of awards and performance it quickly became clear that it would need an extremely versatile lighting and sound rig to do the job.

A 14m x 14m Performance floor needed to be lit in such a way that the audience felt they were watching a show rather than a gymnastics display, but that did not ‘distract’ the performers during their routines. Similarly this had to be repeated for all apparatus including Bars, Beam, and Pommel Horse.

At the same time we had to give separate coverage to the awards stage.

To achieve this we used over 30 moving head fixtures including Robe 600e spots, Pointes, Pro Light Diamond 19 LED washes & Mac 250’s, along with a number of generics.

All rigged on 3 x 40m straight Trusses on half ton motors and chain blocks.

The presenters were supported with the addition of 2 Pani 1200 follow spots.

The overall effect was completed by draping the rear wall in 40m of LED star cloth.

The sound set up required FOH PA for 3 separate seating banks, Fold back for performance area, Hand held radio Mics for the presenters. Playback, and Wireless communication for Stage Management and crew.

The load in and set up was done in just 8 hours on the day before. On the day of the show a full rehearsal took place before the event itself.

The show ran very smoothly and we would like to think that the comments received from London Gymnastics afterwards speak for themselves!

“Thanks to Andy and his team for their invaluable help with our London Gymnastics Night of Stars Evening.

The event was a real partnership with Mac Productions ltd adding a professional production to the evening through their provision of customised sound and lighting.

Their vast knowledge and support both before and during the event really added class and quality to our event. We look forward to working in continued partnership with Mac Productions Ltd in the future and would be proud to recommend their bespoke services.”

MAC Productions Ltd are committed to only delivering the very best for our clients, and we specialise in unusual events and venues.